Blog love and kind words about Le Youth’s spin on “Plus One Minus One“:

Purevolume – “LA nu-disco extraordinaire Le Youth has set his sights on The Hint’s lush ‘Plus One Minus One’, and the resulting remix is a spacey and sparkling ode to the original. With synth-happy elements, congo-like flair, and woody percussion weaving through trance electro, it’s a playful take on the band’s newest single and one that brilliantly twists dance-ready beats into a chill-wave soundscape.” 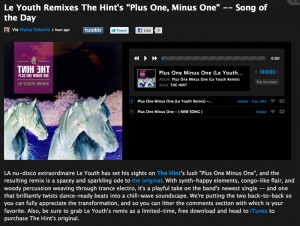 I Repeat, My Religion is the Beat – “The remix adds a sweet nu-disco sound to this pop song… sure to see this track popping up in DJ sets as it’s definitely a crowd-pleaser and a perfect sound for summertime!”

La Nuit – “I’m a big fan of Le Youth and just like his current releases, he nailed this one. Sweet indie vibe fused with chill tropical dance beats. Totally can’t help but smile listening to this one.”

Tilt (LA) – “Constantly searching for that song that makes you feel like the summer will never end… finding the soundtrack to the current summer, but also to bring alive the summers of the past. Keeping the vintage feel… These are songs you should know… amazing tracks by PERSEUS, Zimmer, Manuel Tur, Homework, Trujillio, Colour Vision, U-Tern, Cosmic Kids, Le Youth, The Hint, Bit Funk, Chris Malinchak, Tina Turner & Duff Disco”

Scotch & Murder Music – “Le Youth adds a bouncing remix to The Hint’s Plus One Minus One. At one point in the record, it almost seems unclear as to whether the vocals are saying ‘to save you’ or ‘to save (le) youth’. But Le Youth is in need of no help, clearly, zipping up and down defying ineluctable dance tempo’s in this one. Highly recommended.”

Occupy the Disco (NY) – “Progressive rock act The Hint has just released ‘+1,-1,’ the lead single off of their upcoming album. To celebrate the track, a remix by Le Youth is available for free, shining a new dancey light on the single, which is sure to make OXD fans happy. Since their first album in 2008, The Hint has stuck to a fairly steady alternative sound. With the addition of female vocalist Tessa Marr Jayson (sister of lead singer Joe Jayson), the band has said to expect a new sound that experiments with ‘electronic-acoustic drum hybrids.’ From what we can hear on the original version of ‘+1 -1’ their sound has shifted to become more in line with their progressive rock peers, like Phoenix and Empire of the Sun, which is a great sign by our count.” 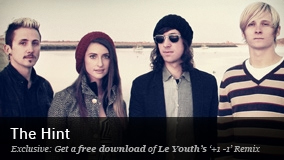